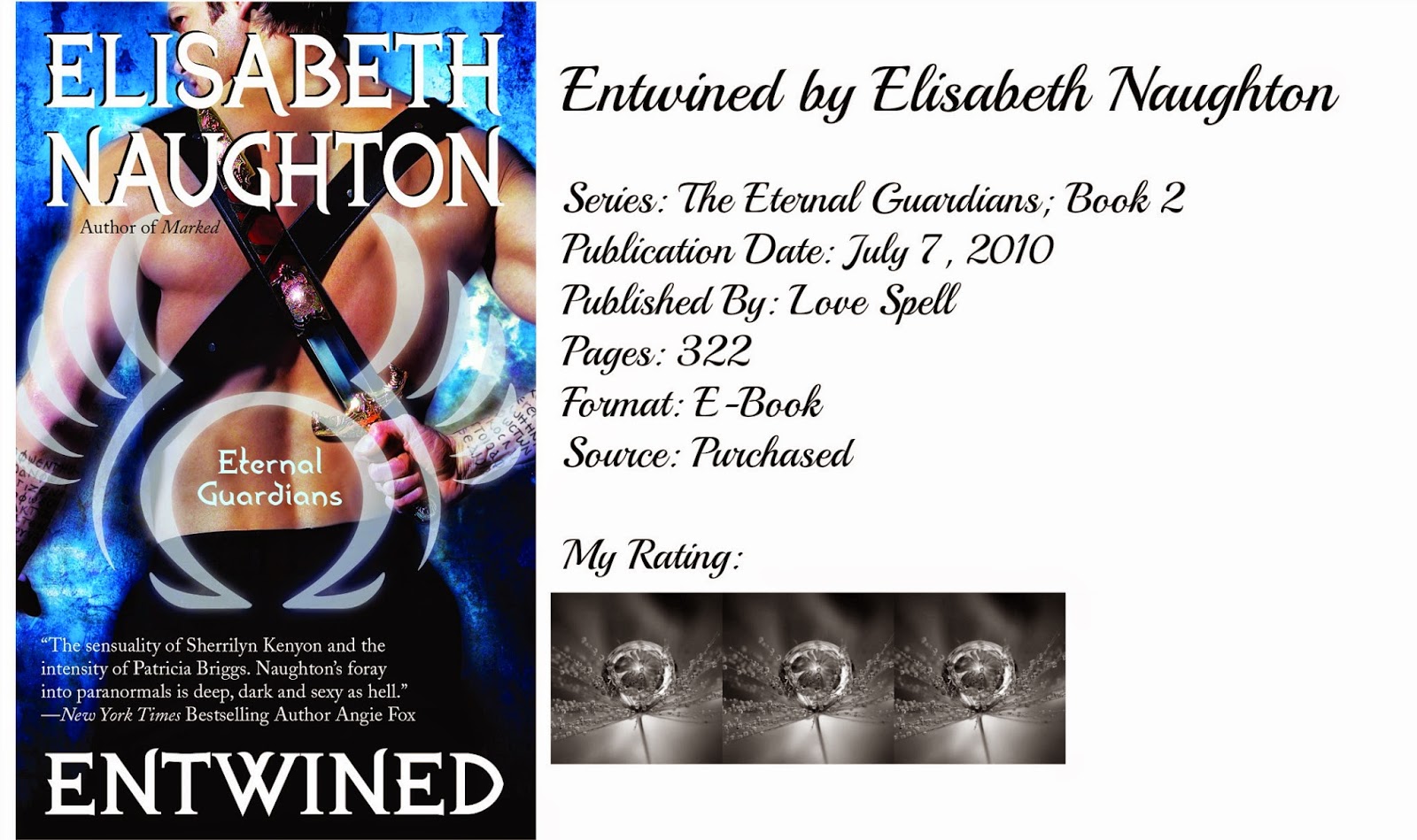 I wasn’t sure about this series at first, but I’m happy to report that I enjoyed this book even more than the first.

This book centers around Zander, the Guardian that is descended from Achilles.  He’s thought to be immortal, or at the VERY least extremely hard to kill.  He’s 829 years old.  He has a serious death wish, so much so that when he is in a funk he’s been known to throw himself off cliffs and the like. Nothing’s killed him yet.  He’s tired of life, and I get that.  You see that a lot in vampire fiction, after so long they are just sick of facing everyday.  What’s worse for Zander is that he found his soulmate ten years ago, and has been without her ever since.  Hera (the “queen” of the gods) cursed the guardian’s soulmates, making the soulmates the last person that the guardian would have chosen for themselves.  Zander’s soulmate is Callia, the king’s personal healer.  They had a brief affair a decade ago, then circumstances (left vague for the time being) tore them apart.  Zander, having found his soulmate and lost her, now has no reason at all to live.  He’s a shell that fights and does his duty, but couldn’t care less if he lives or dies.

This book picks up right where the first one left off.  Casey and Theron (the main couple from the first book) are together, leaving Theron’s former fiancee’, the princess Isadora, without an intended husband.  To ascend the throne, she must be married. (I know, I’m rolling my eyes too)  The king, who is dying, decides that he is going to choose a husband for her from the Guardians, with no thought to what Isadora may or may not want.  This is a common practice in this world.  Women are expected to blindly follow along and not have anything to say when their fathers choose their husbands for them, and to keep their mouths shut and follow along with these husband’s decisions when they are married off to them.  I’m sure there are exceptions to the rule, as there always is, but the practice rubbed me the wrong way, as I’m sure it would many.  Isadora is none too pleased about it  herself, but as the princess she doesn’t feel that she has much of a choice.  The Council (their version of Parliament vs the Monarchy) will never let her rule otherwise.  The King calls the Guardians together, and tells them he has picked Demetrius to marry his daughter.  Demetrius is violently opposed to the match.  Zander steps up and offers  to marry the princess.  His reasoning is that he’s immortal; he has seen whole generations be born, live and die, and he has remained the exact same.  He can commit himself to be Isadora’s husband for the rest of her life, because he figures her life is essentially, to him, just a drop in the bucket.

Meanwhile, Atalanta is mortal, having been made such at the end of the last book.  She and her merry horde of daemons (demons) have relocated from the underworld to somewhere in Canada to continue raids upon the scattered Misos and any other Argoleans and humans they can get their hands on.  It was touched on briefly in the first book that Atalanta has a child, a son, that she is training along with her demons.  In the first book you assume that the child is hers, but here you discover that Maximus is not hers, but was either stolen or taken or adopted by her. Maximus has a enchanted mirror, given to him by the Fate Lachesis. (Lachesis is kind of a deux ex machina for this series; she popped up in the previous book also.  I expect to see her again as well.)  The mirror shows Maximus’ mother’s face, and he guards this treasure closely.  Eventually it is discovered, and destroyed, which leads him to lash out and kill the demon that broke it.  Atalanta is thrilled with this, because that is what she meant to happen in the first place.  She didn’t figure on Maximus stealing the amulet she wears while she was sleeping and running away.  He catches a ride with a truck driver and winds up somewhere in Oregon near the Misos colony before the demons catch up with him and drag him back.

Back in Argolea we learn more about Zander’s soul mate, Callia.  The first thing we learn is that their brief affair ended badly, for reasons we are not told, and that she and Zander HATE each other’s guts.  Passionately.  The reasons why are not given, on either side.  Callia’s father approaches her with the man he has picked out for her to marry, named Loukas.  He’s some big muckety muck with the Council, which her father is also on.  Here we find out that Callia has been going through some kind of “cleansing period” for the last ten years, ever since she and Zander had their time together.  We don’t find out any of the details about this until much later.  Her father is trying to get her together with this guy, and Callia is simply not interested.  Loukas has been waiting all this time, so he’s impatient to get married to her.  It’s kind of creepy, actually.  Isadora, meanwhile, has been doing research into the Horea, or the Hours, another prophecy.   Isadora and her half sister Casey are all ready the Chosen, whose joining destroyed Atalanta’s immortality in the first book.  Isadora has reason to think that they are also part the hours, but there are three of them, not two.  She makes a deal with Orpheus (half demon, or something along those lines; he’s very interesting.  I actually am rooting for him and Isadora to get together) for information and defense training.  Orpheus knows more than he lets on, which makes her curious.  Later on, Zander is injured, Callia is fetched from Argolea to earth to heal him. They are hidden together in a cave while he is recuperating, and the physical inevitable happens.  Despite all of the hate between them, their chemistry is undeniable.  The whole story between the two of them comes out, and it is a doozy. Part of it I had suspected, but it still surprised me.   I’m keeping a big part of this book secret, because the reveal in the book of their past IS so well done.   I thought their backstory was very well done, and I liked that this story is one of two former lovers finding their way back to each other.  All of their history together makes for a fascinating story.

It turns out that Isadora’s hunch is right, and Callia is Isadora’s and Casey’s half sister, and they together are a group known as the Hours.  Isadora has the gift of foresight (although it hasn’t been working lately) and Casey was revealed in the last book to have the gift of hindsight.  Callia is the balance between them.  Their powers can be used together as a weapon along with the amulet that Maximus stole from Atalanta.  ( He left it with the truck driver before he was recaptured by the demons.) They can find people, pinpoint their location.  Problem is, when they try to find Atalanta, she sees them, knows they are looking for her.  She is willing to let the boy go, in trade  for Callia and the amulet.  This novel climaxes in a huge battle worthy of the big screen.  Atalanta gets away, but Maximus is rescued, and the betrayal of Callia by someone close to her ties some loose ends.

The story picks back up after the battle in Argolea. Remember, despite their reconnection, Zander has already promised to marry Isadora. The king has been told that he has another daughter, but he is bound and determined to have Zander marry Isadora.  Zander tells Callia they will run away to the human realm, but Callia has had enough of men making decisions for her and refuses. Then we flash to the wedding day.   Isadora is standing in front of her mirror, wearing her wedding dress when she has a vision. It’s the first one she has had in months - and it is of her and a man in an intimate situation.  The man is NOT the one she is supposed to be marrying, and not even someone she likes. Then something else happens...nope, not going to give that away either, but it’s a cliffhanger that will have you reaching directly for the next book in this series.   Which is what I’m going to do. Right now.  :)

and after that:
Eternal Guardians Series #3 - Tempted By Elisabeth Naughton