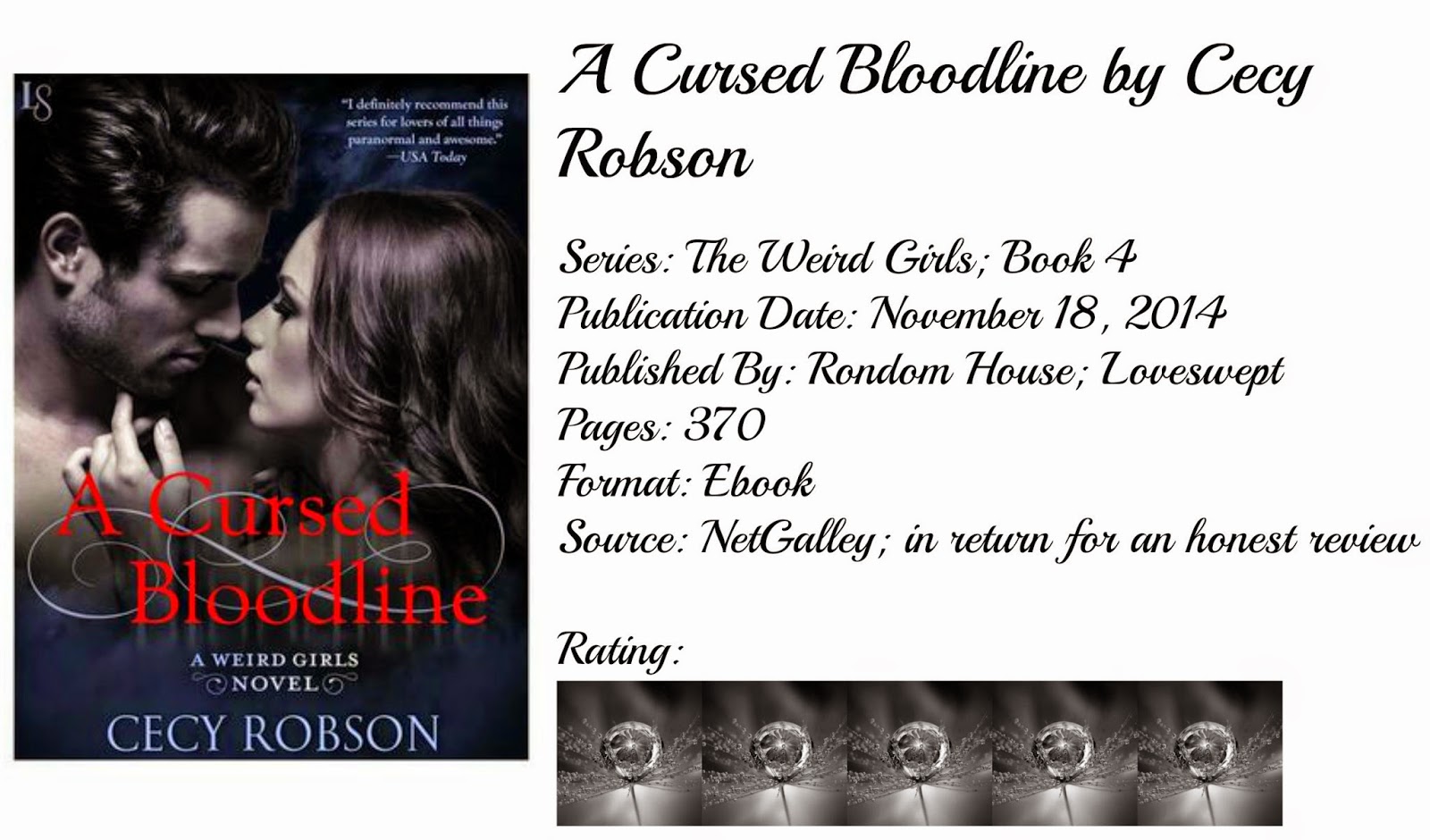 Alright, first I need to thank NetGalley and Random House for introducing me to Cecy Robson with this book. And for providing me with a copy in return for an honest review. This series caught my attention as I got an email saying something in the lines of, "Check out this book." So I did. I looked up the series, the author and "hmm'd" to myself, Talk to Emmy and we read through the blurbs on Goodreads to see what the series was all about. From first one I was like "I have to have this series, it sounds epic." And, yes, it is EPIC.

This novel, number 4 in the series is... there are so many words to describe it. Epic, fun, hot, scary, heart throbbing, heart stopping, sorrowful, mesmerizing. There are many levels to this novel. Honestly it is one of my new favorites. Cecy has encased the perfect hidden world of supernaturals for Tahoe. Using Cali and Nevada as her focal points she makes it into something fresh and new. This is what draws the reader in, makes them sit up and take notice. Kind of like a wolf sitting up at attention. (laughs) But seriously, I was blown away.

I'm ready to shout from the rooftops that this is the new fad. This series is a Must read and this novel itself is the GLUE that will keep it all together.

Now, as for my review, I am trying to do this so there are not too many spoilers. So here we go.

Celia Wird, girl, tigress, badass that she is is keeping tight hold onto a secret that could tear her world apart. And a secret that would mend some of the broken pieces. But since evil looms about, waiting to strike at the mention of her secret she is held captive by it. The pain, heartache and chaos around her are only pushing her further and further into the cocoon she so desperately needs to survive. Her strength is no match for the brutality that she faces.

Her family, friends (pack members), and the vampires think she is going mental. Maybe she was at times but the terrifying reality that your entire world could be taken from you in a blink of an eyes, literally, was enough to make her flee their attempts to help her. She is made to sever her mated bond to Aric, or he will die. There is only one hope for her, even if she doesn’t see it coming. That’s Danny. Her friend, her ex-boyfriend, her constant nerdy bottle of hope. He locates a spell, performs it and hopes that she knows what she is doing.

Koda, her big, hot tempered brother-in-law figures out what she did and tells Aric. You’d think that wouldn’t go over so well…. and yeah it doesn’t. Aric finds out Danny helped her do it and in a blind rage hunts Danny down. Celia does all she can do to stop Aric from killing Danny. (He does beat the mess out of him. I can’t blame him.) The only way to calm Aric’s rage is to get close to him. Let her touch calm him. When this happens the one attacking her appears. She has to make Aric hate her, leave her now or someone dies. This heartbreaking awful confrontation hits hard. Like a gut punch.

After the attack Danny confronts Celia (within earshot of the wolves) about who is attacking her. She freaks out and makes him stay quiet. For his safety and the safety of the others. Her selflessness is more than anyone could ask for in a sister, a lover and a fighter.

Thankfully from that time on Danny stays close to her. Since he can hear and see what is attacking her. Maybe there is hope. Never hurts to be able to share all your secrets with someone. After this episode of “how can I hurt Celia today” is over things go even more downhill and quickly.

Misha is taken by shape shifters. (The Tribe) This makes Celia “the mistress of the house” and in charge of all of Misha’s homes, business, money and all. She handles it well through delegation.. (laughs) The Alliance won’t help to find Misha. Celia is confronted, in the Den, by the vampire master she met in the beginning of this series from New Jersey. He wants to challenge her for Misha;s family. Without a word, only a single kick to the head she snaps his head off and leaves. Talk about pissed off. Since no one is willing to go after Misha, our girl Celia decides to. She along with the werelion Tye and the strongest of Misha’s family head off after him. It’s a rough journey, one that ends a lot of vampire and tribe lives. But it has to be done.

While Celia is off on her rescue mission… Danny, our sweet little Danny goes to the Den during a meeting that houses the Elders and the pack and busts in to tell them who has been attacking Celia. Needlesstosay that went over as well as a hot coal in the seat of your pants. Aric has learned the truth. She didn't hurt him just to be a bitch. He jumps a plane cna goes after her. Meeting up with her right as Celia and the vamps rescue Misha and she tries to kill the dark witch responsible for his capture. She only manages to wound the witch before she spells Aric. He is moon poisoned. (The were version of being in a blood lust state.)

Celia, Tye and one of Misha’s vampires get Aric caged, tranqued and on a plane home. Celia hopes the Elders can help him. Yeah, lets just say that was NOT a good idea. As a pack they are ordered to end his suffering. But we can't have that. (I will be honest this almost made me have a heart attack. I so screamed NO at my kindle as I read. LOL) Celia takes her eagle form and escapes with him in tow. They land when its not possible for her to go any further. He isn’t a happy wolf… Aric attacks Celia, biting her. Then stops. Something about that bite makes him recognize her as his. She takes care of him, finding them food, shelter and making a choice to call in help. Her sisters.

She sends her sisters back to South America to get the witch she weakened days ago to release Aric from this curse. After a few days Celia wakes to a strange tingle but thinks nothing of it. When she wakes again Aric is whole again. His human side is not scared and perfectly him again. Its only a day or so later that Aric’s warriors, Koda, Gemini and Liam find them. Seems her sister’s fake story and an odd number that wasn’t wiped off the phone led them there. The warriors are told the WHOLE story of what had been going on. Of course they are mortified.

On the way to safety the asses of the Tribe attack them. Things go from bad to worse to you have got to be kidding me. Then it surpasses that all and goes straight to utter horror. Seems our bad guy didn’t like being called out. Things are topsy turvy at best until Celia finally wakes. If not for Aric, her sisters Danny and Misha, yes our lovely master vampire she wouldn't have made it. The evil would have won. Seems Danny has found out what his gift as a blue merle were is. Thankfully he figured it out in time to save the day.

As things settle down, they all move forward. Seems love, heart and family are the best medicine for many things. Too bad.. it doesn’t last long.

I know this isn’t long and drawn out with more details but, the books not out until Next month. I will not ruin the most epic of stories by giving away the good stuffs! So.. with that said I leave you with this.. the next book in the series is not out until 3/10/15 so until then I will pacing and making grabby hands…. cause I NEED it!! This author is now on the list of MUST READ, MUST BUY IT AL list. And, anything in the world of Weird will be ordered the moment I see it. (grins)