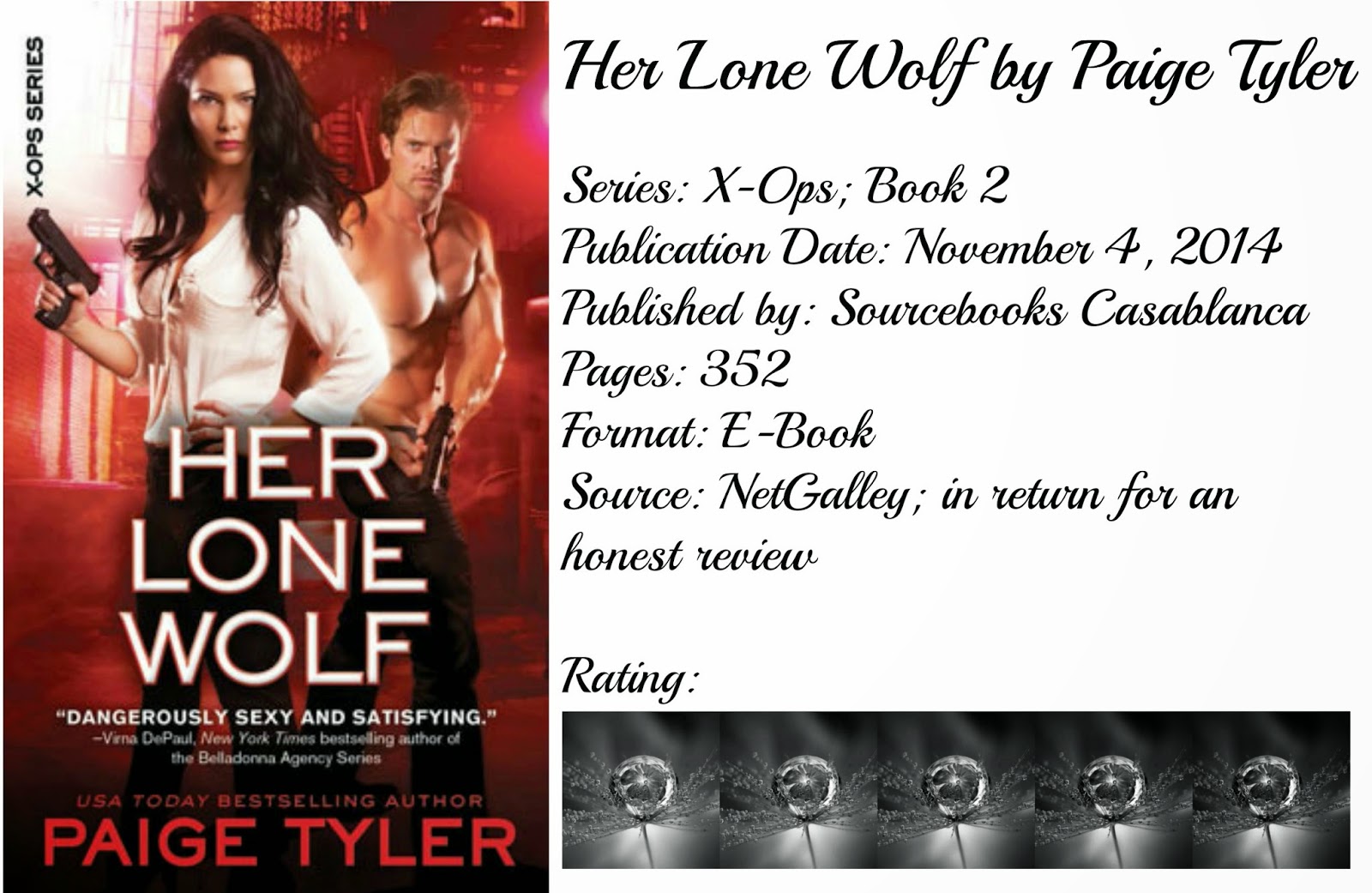 First, I have to thank NetGalley and Sourcebooks Casablanca for allowing me an ARC of Her Lone Wolf to read.. and yes my honest opinion of this novel is... IT'S AMAZING!


Secondly, Thank you Paige Tyler for this kickass series. the characters are different and unique in ways that makes them stand out more in your mind as you read. Or for me at least.


Her Lone Wolf let's you get a look into Clayne's history. Or his story if you want to call it that. We got a small glimpse in "Her Perfect mate" but it's great he has his own story to tell. We get to see what happened to him in the younger years and why he lost his partner, is so angry and out of his mind sometimes. The fact that Dick, the asshole, shifter hating Deputy Director of the DCO brought Clayne in made me raise a brow. Had to be a reason right? But he got him into the program, got him cleared of some bad doings. You'd think that would have made him (Dick) not be a dick but his name fits him. Just saying.


Clayne's ex-partner, Danica, was recruited from the FBI by John. The DCO's Director. She had a skill set special to her and he paired her with Clayne. Was it perfection at first sight? Urm, no. Clayne didn't want a partner. They would only slow him down but he learned quite quickly from day one that Danica didn't play that helpless human woman role. She was a badass FBI agent turned DCO operative. There was no playing games with her. After months of tugging and pushing against each other they found a grove that worked for them both. Then, the unthinkable happened; Danica turned on Clayne and not only left him with a kick in the gut (figuratively) but left the DCO. No word why. Nothing just some harsh words and she was gone.


So here we are two years later meeting Danica and her new partner Tony. They are working a case that will turn Danica's miserable world upside down in so many ways. There is a serial killer on the loose. When Danica realizes she is dealing with a shifter she knows what she has to do. She calls John and updates him on the situation. He agrees to send someone out to help her work the shifter angle. Well guess who gets the assignment... dum dum dum... Clayne. Guess who isn't happy about the assignment? Yep, you bet ya ass Clayne. He is one pissed off wolf when he catches Danica's scent. Not only is she there but she is assigned to "keep him" with her and her partner by her boss. (Who is like Dick, a real dick.) All of the bad memories flood his memories. As they do Danica's.


As the time moves on the case gets more and more intense as do the feelings that are being rekindle in both Daica and Clayne. The more they remember the good times they had together the more they ache to be together but they both think the other hates them. Which is understandable. But oh so wrong.  Finally, there is a small break in the case. Clayne comes face to face with the shifter serial killer but the little cat gets away from him. Only because he had a care waiting. They managed to save a victim, that is a plus. But now the killer fixates on playing a game with Clayne. Shifter to shifter. Its not a fair game but Clayne goes along with it to save the next victim. But like their luck is they don’t get there in time.  Clayne takes this personally. he should have been faster, he should have figured the drop spot off sooner. His wolf isn’t any happier.


Danica pulls him out of the office when Tony suggests getting him drunk or laid. Drunk she could do. Anything to get his head back in the game. Both he and Danica are strug tight, ready to explode with anger and frustrations. So when he decides he’s had enough of this  let’s try to talk us out he tries to walk away. When Danica tells him she didn't have a choice but to leave him his radar goes off. He manages to get the real story of why she left him and the DCO out of her. All goes back to Dick. he brought Calyne into the DCO in hopes he’d lose his control, flip out and they could close the shifter program. then they could get rid of the shifters. But with Danica by his side Clayne was in control. Danica made his wild side relax and kept him from getting himself in trouble.


Well see Dick couldn't have that. So… he uses Clayne’s history against him. Giving Danica the choice of staying with Clayne as partners/lovers or leaving him, the DCO and DC forever. Never to come back. If she stayed he would turn in the evidence and Clayne would go to jail for the rest of his life. Well the choice was hard but she had to leave. She'd do anything to keep him safe.


Now that he knows the truth they can move on. Focus on the serial killer and make a plan to make Dick pay. Payback is a bitch.! Now the shifter ups his game after Clayne and Danica, with the help of Kendra at the DCO figures out who he is. They really piss him off. So the next victim is random and hits home. He kidnaps Tony’s wife, who is Danica’s best friend. Why? To make Clayne come after him. So that is exactly what he does. They track him and take him down. It should have all ended there but it doesn’t. (laughs)


I love a good story when you think it’s over but it’s not but I won’t say what happens next. Except that Dick is a pisshead and he does get a boot in the ass in the best of ways. An untraceable way at that. Things for Clayne and Danica are set on a path of love, completeness and discovery. Danica moves back in with him. transfers to the DC field office of the FBI and Clayne puts a ring on it.  ‘Bout time too.
I am sooooo ready to have more of this series. It’s truly so original in theory that it makes a perfect movie in my head. And yeah I said that outloud. (laughs) This idea that Paige and her husband sorted out is the Perfect new adult romance. Ask Emmy I am all bouncy over it. She knows all about it ‘cause I can't stop talking about it.  So go get it. If you love shifters (as I do) you will love this action packed series.


Until next time, keep the pages turnin’.