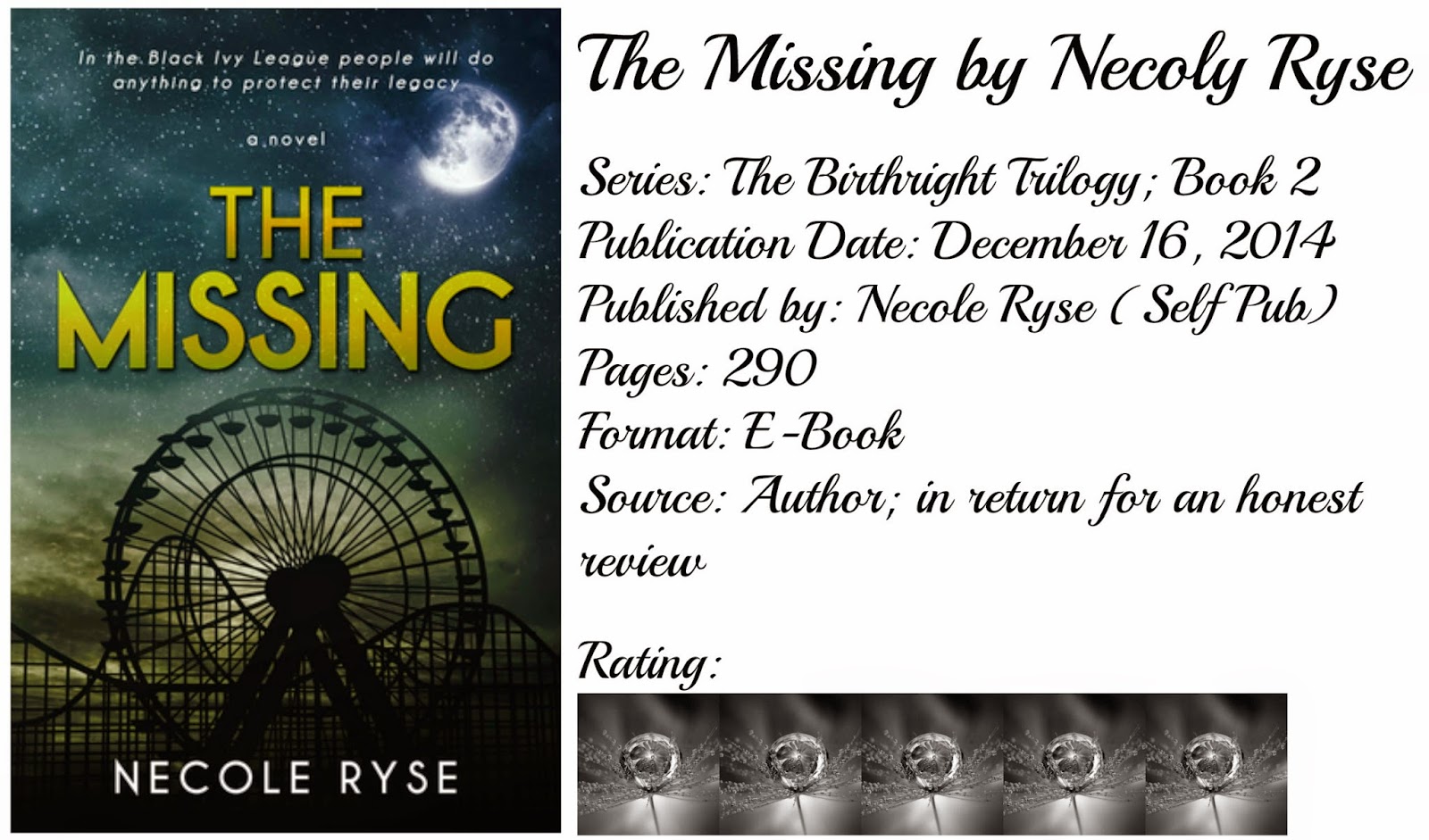 First off let me thank Necole for sending me an ARC of this novel in return for an honest review.

After "The Legacy" I wasn't sure what to expect on the EPIC meter I mean. Necole is good at tossing you one way and just when you think you have figured out who done it.. someone or something else pops up and says "Ello Poppet". I can honestly say this novel and it's predecessor are golden! Epic! An art! And did I mention Epic? Well yeah I did but it needs to be said again! Ha... so frigging excited after reading this second book. The way Necole has the story laid out, the characters are so.. in your face but on the side lines at the same time. Its hard to explain and really do it justice.

As with the growth of the plot and the characters you get to see more into the soul of this story. The real deal behind all of the drama. The plague of emotions that are hitting the students adn the staff of B. W. Fitzgerald University. Its like being on a roller coaster. I usually hate roller coasters but this is one I willingly ride and love. I am sure I hit every emotion right along with them. From laughing, to gasping and calling a few people in this novel a few unlady like names. (laughs) And yeah that was done out loud, thank goodness I was alone. But hey, it was needed.

In this novel Rae is right where we left her in book 1. Jeff is missing, she is scared shitless and has no idea what happened the night that he disappeared. Nothing. She went to sleep and then he was gone. She was alone and as the days went on the pain and heartache hit her harder. She is being questioned by the cops. Was she guilty of something foul? Of course not but as the last person to see him alive she is a person of interest even though they have nothing on her.

Her 'friends' Regina, Andrea and Corinne are there for her at first until an article comes out in the school newspaper that she was in fact the last soul to see him alive. Well shit got stinky for a while. Though I guess that was to be expected. Every time I figured out what I thought was going on I was sent in a new direction. O.o awesome stuff. Then.. 'B' starts sending more cryptic texts, there is a beach party, and just when they all start to have a bit of fun and be 'friends' again... all hell breaks loose. Jeff is found dead. By now its been months and apparently he over dosed.

Heard the saying bad things happen in 3's? Well that is the case. Rae is torn in so many directions the kid starts to slip. Maybe she was going crazy, sure felt like it to me. More messages from 'B' turn her inside out when they are followed by strange things happening. Like someone trying to kill her. Or at least that is what she thinks. It is a crazy train that follows that girl in her wake. Add that to Rae finding a picture of her father that leaves her with more questions of her past, her family than she can find answers for. What will happen next.

One good thing comes from the ashes as they say. Rae meets Andrea's brother at the beach party and weeks later he calls her. Enough time has passed.. and he really likes her. He treats her good (so far) and I think for once as the pieces of the puzzle she is trying to sort out fit together Rae will find the answers she seeks. It can't all be for nothing.

I still stand by what I said after book 1.... No matter the skin color you are born with Rich kids are dicks. Rich people be cray-cray. The more money you have the more of an ass you are. (shrugs) You can't stop stupid and ya can't stop bitches from trippin' in their manolo's.

Now, just to be a little…. funny here is a row of gifs, to sum up the emotions and such for The Missing…

That is all I can say. I don’t want to ruin this for anyone and I can only imagine the many happy faces that will be coming from the pages of this novel. Some may ask if I am biased since I am a fan of Necoles' and was given the book to read. Let's clear this up now... I am not that girl. I am honest as I am white.. and since I could glow in the dark.. that is a lot. I love when I can get so drawn into a book time ceases to be an issue. Who the hell needs sleep anyhow. Yeah so not my thing when I was nose deep in this little ditty. Reading is an escape for me, as I am sure it is with others so.. that being said lets just say I take my reading and blogging as series as I do my 40 hours a week job. This one is a bit more rewarding in the end because I get to help those that need it.

I'd never steer you wrong. Trust me this novel, series and author are worth the time, energy and effort. It doesn't take but a minute to get it! The 16th of December will be here before you know it.


Until next time... happy reading!!