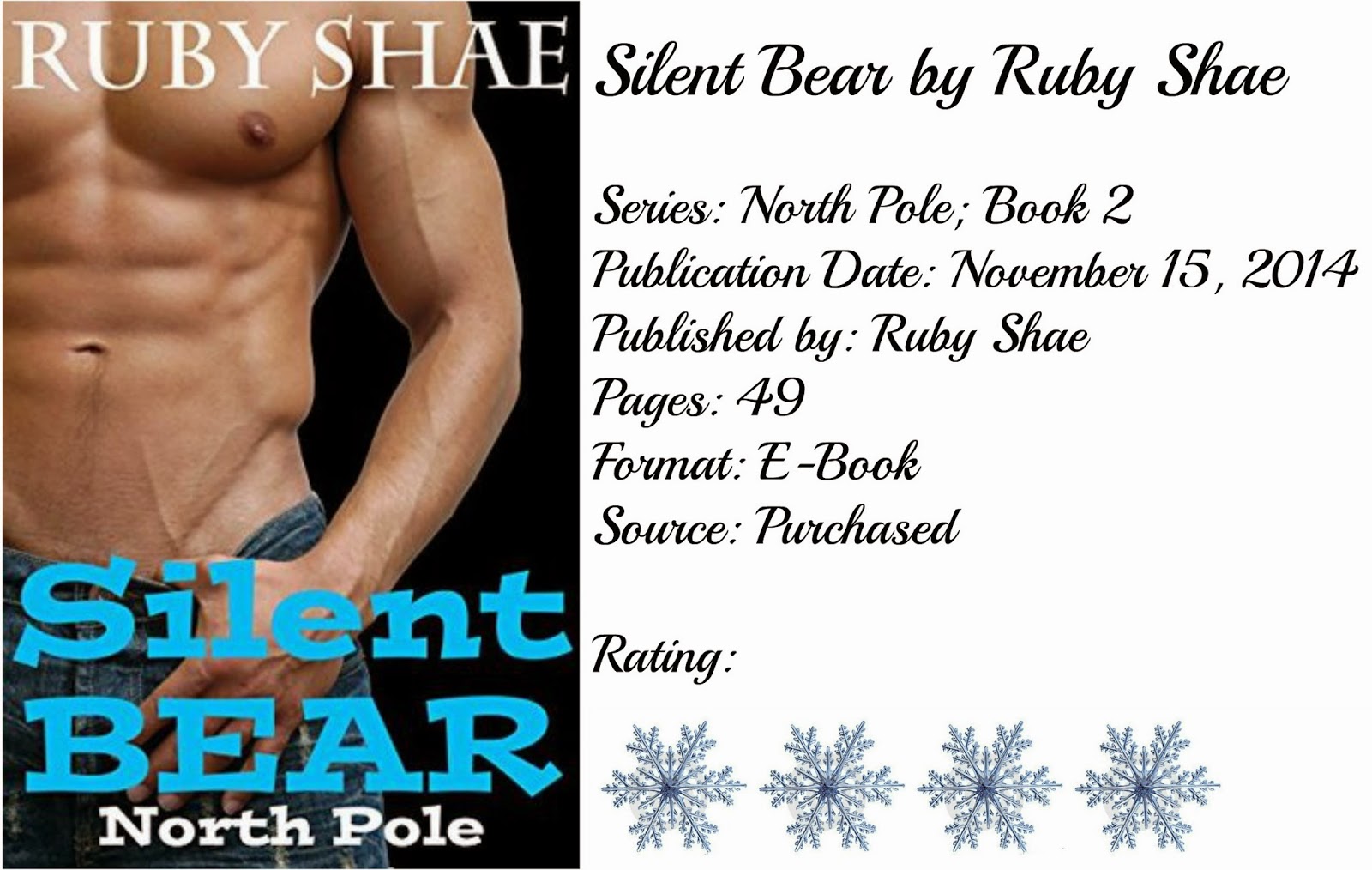 Again we are in Santa's Village in the North Pole where our Arctic Fox shifter Tracey and Polar bear shifter Mark are trying to get noticed but neither is willing to say “Hey I want you to be mine.” Mark and Tracey both know they are Mates but for some reasons they just can’t tell the other.

It all started a year ago when in a dark hall of the bar Tracey confessed her feelings -her true feelings- to Mark. They shared a kiss that could have brought her to her knees.. but both of them thought the other was drunk so after that day they never mentioned it again. Mark had tried to go to her the next morning but he had to work. As an enforcer it was his duty to patrol the boundaries and make sure their village was safe. Tracey works in the toy factory and despite her being a shifter she is vibrant. She dies her hair platinum blonde with pink highlights and is all about pink. Loves sugar cookies with extra sprinkles (though I think we all like that). She is petite, well built and not really got a lot going on in the boob department but for Mark all he sees is perfection.

When she thinks back over the last year the things he said about her -to her- sounded as if he was making fun of her. Running any potential man -mate- away from her. But what she doesn’t get is he isn’t making fun of her. He was talking her up. He loved the fact that she was quirky, and had a fond love of pink. Maybe if he had told her after that first kiss... or if she had said anything to him... things would be different now.

Alas, they were in a standoff. Now with things heating up -mainly her temper- he was following her up to the roof of the toy shop. Their argument left him confused and mad. She needed to see Santa to see if he could find her a mate. She ran off towards the stairs and slammed the door -locking him on the roof- and knew she needed to get to Santa. By the time someone opened the door for him she was already with Santa and Mrs. Claus. He took off running and busted into Santa's office. (laughs hard) Of course Santa knew why he was there, even though he didn't say much about it at first.

Mark tells Tracey in front of the Claus’s that he is her mate and she gets so upset -thinking it is only out of pity- that she starts crying and runs off. He is determined to show her that he is really in love with her. Santa of course is more than willing to help him out. Tracey meanwhile is running off into the tundra, letting her legs carry her far from Mark. But there is a storm coming and by the time Tracey stops running and looks around she is surrounded by ice and howling winds. She curls up on the ground and after a long search Mark finds her. His bear barely being able to follow her trail. He shifts -since they can shift fully clothed- wraps a blanket around him and her and starts walking off with his little fox curled into his big warm chest.

When Tracey wakes up she is snuggled down into a big red blanket. She has no idea where she is or who is here with her. When she sees Mark he is coming into check on her. Her fox is buried down under the covers. hiding. She gets out of bed and shifts back to human. Mark tells her they are in cabin and they need to talk. Tracey isn’t ready to have any of that. She grabs for her necklace but its gone. Santa has it and leaves her a note that she will get it back in a few days. They have 3 days to sort themselves out.
And they need all of that time. But eventually… it all comes out while they are decorating the Christmas tree in the cabin. Mark brought all sorts of things she likes. But they are things he likes as well. She of course, again thinks he is making fun of her but Mark confesses to her about being completely sober that night but seeing her flirting with Quinn the next night he thought she was drunk and got them confused. She told him of her thoughts and finally they clicked. (snorts) In more ways than one. Needless to say they both see what they have been missing for the last year. At the end of their 3 days they are now fully mated to each other and happier than ever.

They both got the best Christmas present they both needed. Each other. This was another sweet, short story full of awesome! I can’t wait for more.

Grab the hot cocoa and another book. Keep the pages turning 'til Santa comes!