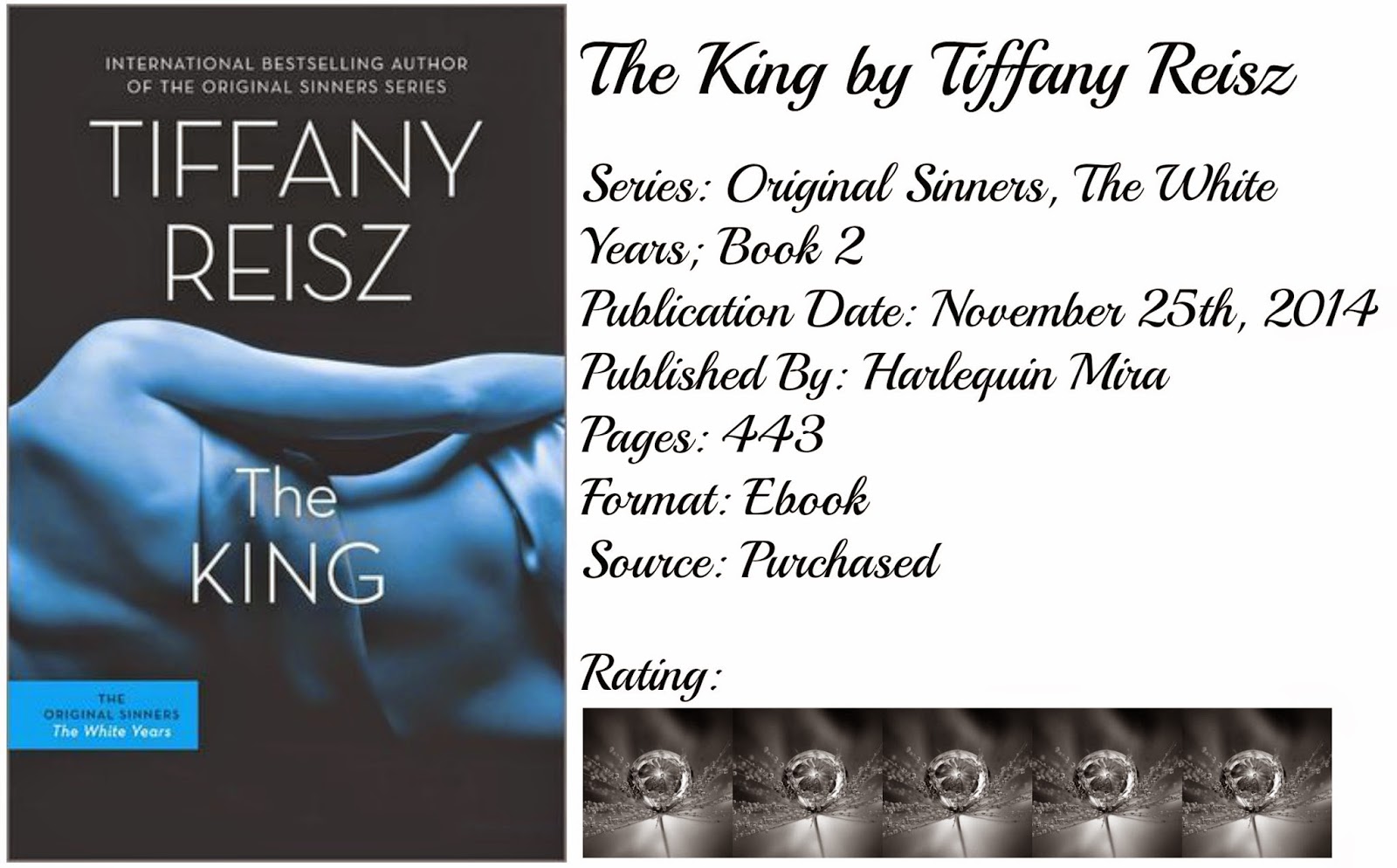 It’s no secret at all that I am a big fan of Tiffany Reisz.  I had this pre ordered, and dove into it as soon as possible.  I fully expected to finish it in a day, because I had done that exact thing when I read the Saint.   Alas, it took a bit longer, because you know, holidays…..**laughs**  For some reason people around my house expected a turkey and a macaroni and cheese casserole....pppphhhffttttt.....


Lemme give you a quick synopsis of the whole series arc before I move the fangirling to the book at hand.  (**big laugh**)  The Red Years, the first cycle in the Original series is as follows: The Siren, The Angel, The Prince and The Mistress.  There’s various novellas throughout, and free short stories on her website that are all within  the same world.  I’ve read Seven Day Loan (or the Gift, I’ve seen it listed with either or both titles).  Also very good - I’ve yet to read something from this author that I didn’t like.  All of this madness can be set at the feet of my most awesome cousin Heather, who pointed me towards this author in the first place.  I really should buy her something expensive and alcoholic as a thank you……


These books are billed as romance, published by Harlequin.  Now I know I have said time and time again that I don’t generally read straight up romance because I have read so many that were, well, stupid, but I would call these more along the lines of erotica, because of the BDSM element involved.  Let me make one thing clear:  DO NOT THINK FIFTY SHADES WHEN I SAY BDSM/EROTICA!!! **shudder**   If I was going to compare this series to anything  I would say it’s more along the lines of Anne Rice’s Sleeping Beauty Trilogy (The Claiming of Sleeping Beauty, Beauty’s Punishment, and Beauty’s Release).


I started calling them the Unholy Trinity in my head - lol!


You see one of the twists is, Soren’s not only a dom, or just a sadist (which he is), he’s also a priest.  Yep, a collar-and-robes, says-Mass-on-Sunday, I’m-going-straight-to-hell-for-being-attracted-to-him priest.  **shrugs** I blame the Thorn Birds, and my religious upbringing (Baptist/Methodist, educated in a Christian school)  maybe it’s the element of forbidden-ness, but I find this whole concept just sexy as hell.


Now, I won’t tell you the whole story of the Siren, only that you MUST read it first, or you will be completely lost in this series.   To put it simply, the Red Years are Nora’s years as a dominant, while the White Years are prequels, and outline Nora’s years as a submissive.  The White Years includes the Saint and this novel so far, The Virgin will be out March of next year.  I’m terrible, I admit it, when I finished the Siren it was right about the time the Saint came out, and I skipped straight to it.  I’ve still got to go back and get caught up on the Red Years. The Saint is the story of how Nora and Soren met.  As I said at the beginning of this review, I read it in a day.  Yes, it was that damn good.  It was exactly the story I wanted to hear.  It was perfect in every way.  And I’ll STFU now for fear that I will start gushing even more about it, and will never get to the actual book I’m reviewing.  **snickers**


For anyone that read the Saint, you will be happy to know that the “bracket” story in The King picks up right where the Saint left off.  Kingsley is telling the “main” story to Grace Easton, Zach’s wife (We first meet Grace in the Siren, and at least two short stories on the website.  The Mitzvah is my favorite.)


Here's the link to the website: http://www.tiffanyreisz.com/  Go read and get just as addicted as I am!!


Kingsley’s story starts when Soren re-enters his life.  He walks into his house one day and hears piano music.  He had placed a piano in a room, but would not let anyone play it.  In his head, it was Soren’s piano, and he was strict that no one was to touch it.  He bursts into the room, ready to tear the head off of whoever is playing, only to damn near have a heart attack when he realizes who it is.  It had been eleven years since he had last seen him.  Besides being shocked to see him, Kingsley is even more shocked to find out that his friend and former lover is now a priest.  He’s not just there for old times sake, however, Soren needs Kingsley’s help.  Nora (Eleanor at this point in her life) has been popped by the cops for jacking cars for her dad, and if Kingsley doesn’t pull some strings she could be put away for a very long time.  At this point Kingsley is in shock, but agrees without hesitation.


Remember I told you he hadn’t seen Soren in 11 years?  The last time he did see him was after he had been badly injured, shot to pieces, and lying mostly incoherent in a hospital bed.  He joined the French Foreign Legion, and like Liam Neeson (lol) discovered he had a “particular set of skills…” which his superiors put to use.  They put him to such use that he suffers what I would call PTSD, he has been held prisoner and tortured - Kingsley’s had it rough the last several years.


The other main storyline concerns the formation of Kingsley’s “empire” which at present in the story is in it’s infancy.  He owns one strip joint, the Mobius, which seemed to me just to be a very early version of the Eighth Circle.  Kingsley is directionless at this time in his life, still recovering from his wounds and very much without purpose.  I swear, he's so lost that you just want to hug him and fix him a sandwich.  It's pitiful.  His dream is to make a place that all of his “people”(lovers of kink of all stripes) can gather and play in safety, without fear of exposure or judgement.  It’s brought to his attention that there is an especially awful church that is trying to build a headquarters in town and it just so happens that the abandoned hotel they bought from the city is perfect for the club that he dreams to make.  He makes it his mission to get this hotel from this church group, and run them out of town if possible.  I don’t know if this church was based on the Westboro Baptist Church, but they sure sound enough alike to be kissing cousins at the very least.  They are foul.  I’m not even going to list the crimes they are guilty of, because the author does an excellent job of making you hate them without resorting to the potty mouth that I’m so famous for around here.


The story in The King parallels the story told in the Saint.  I enjoyed that very much, as I was constantly trying to figure out “where I was” in the story, what was happening in the other book at the same time.  I love being able to see the “other side of the story” as it were.   Kingsley and Soren’s reunion in the “present” is only part of the story being told here.  You get large parts of their past together as Kingsley is remembering it.    I was seriously looking forward to these parts and was not disappointed.  (omg ya’ll….)  **fans**

So in conclusion….for Pete’s sake go read it, you won’t regret it.  No matter which direction your kink kinks, you will find something you will love in this book.


Love comic relief in all of this drama? - I give you Soren and Kingsley playing soccer, of all things!


Love little guy against big guy fights? - Reverend Fuller and his congregation of brainwashed cattle will make you grind your teeth into powder.


This book has everything.
I’m probably going to re read it before the end of the month just to go back and savor it.
Go buy it and read it.
That is all.


Shameless fangirling over (for the moment)


Till next time, keep it between the pages.