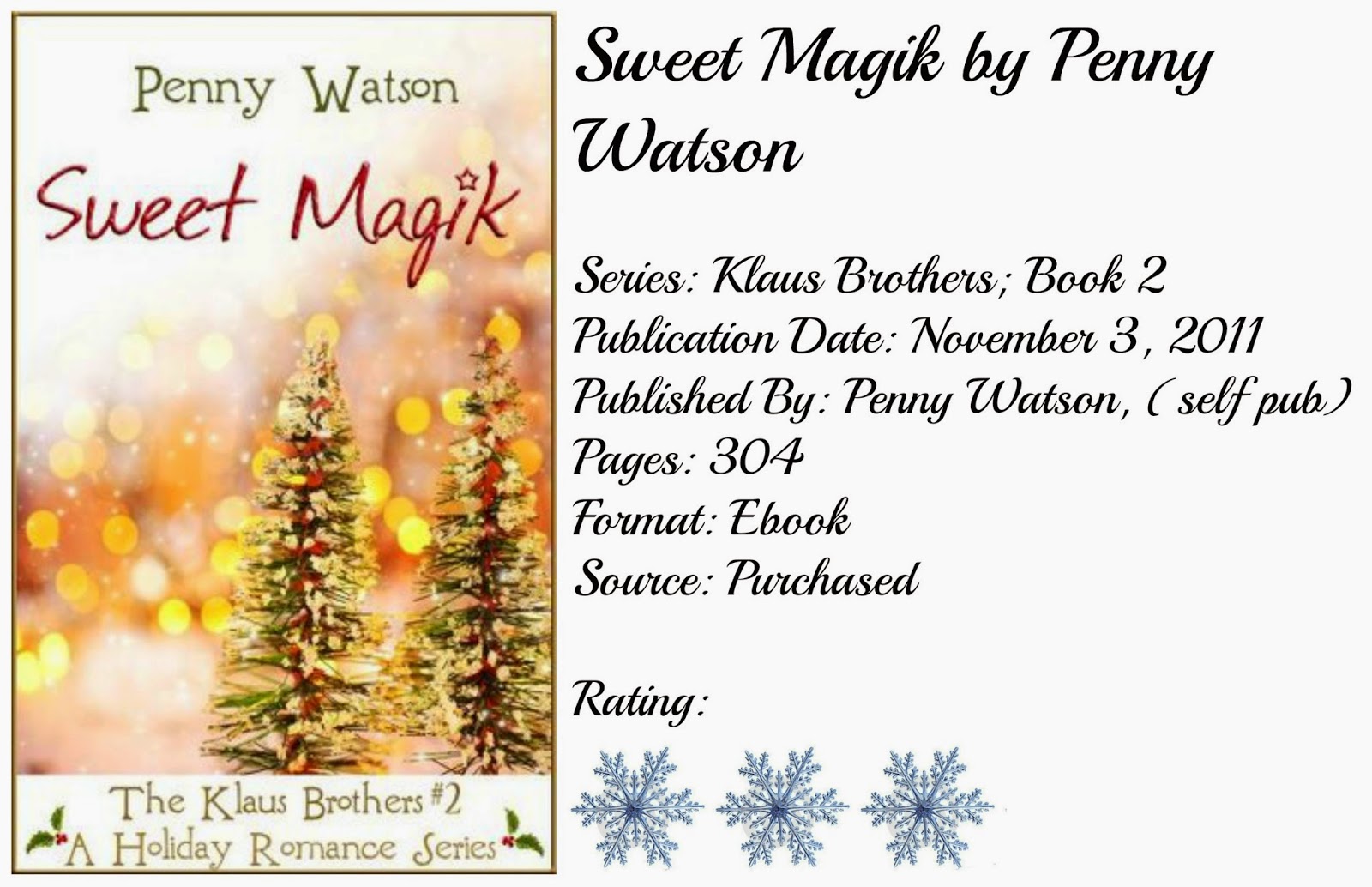 I was eager to begin the second novel in this series!  I blew through the first one in a day, and was pleased to see that this one is better than twice the length of the first.  The author did not disappoint me, she carried off a much longer story with no trouble at all.  At no point did the story drag or bore me, and I had trouble trying to put it down.  Do you know how hard it is to try to wash dishes and read a kindle at the same time?

This book focuses on the youngest Klaus brother, Oskar.  Oskar is the Director for  Elvin Resources - yeah, he’s the HR guy for the North Pole.  He’s like no other HR guy you have ever seen though.  He is a thrill seeker, a snowboarder, the wild child of this bunch.  His hair is dyed green, which I thought was hilarious.  He generally spends his off time snowboarding and dating models, so it was a total surprise to him when he notices Kiana at his brother Gregor’s New Year’s Party.   Kiana not his usual type - she dresses like a librarian - in fact she is a librarian, at the New York Public Library.  She labels him as a self absorbed punk player from the moment she sees him, but he manages to surprise her with his love of literature.  They spend time talking and wind up sharing a earth-shaking kiss at midnight.  Then like Cinderella, she’s gone.

Luckily it  doesn’t take him too long to track her down, and convince her to come out with him for coffee.  Kiana is reluctant.  She has her own issues: she was raised almost homeless in one of the most beautiful places on earth (Hawaii, she’s from Hawaii), and had her heart torn apart by her former fiance.  She doesn’t trust easily and is finding it difficult to believe a word he says about wanting to spend time with her.  They have an intense attraction for each other, and often find themselves getting carried away making out and not meaning to.  Add to that the fact that they are having very life-like dreams about each other…..sounds kind of like magic, huh?

Well, magic might have something to do with it.  This novel has a fully involved side story that is every bit as good as the main romance.  Ingo is an elf, a worker at the toy factory in Glasdorf.  He’s an elf with a problem: he just got passed over for a promotion, due to a misunderstanding and an outright lie.  Seems some other elf took credit for work that he did, and Oskar mistakenly recommended the imposter for a promotion to his brother Sven, the head of the toy factory.  The imposter, Per, is living up the high life now with his new promotion, and for some reason Ingo hasn’t set anyone straight about it.  To add insult to injury, Per is trying to make a move on the girl that Ingo has had his eye on for years, Lys.  Ingo’s not having a Happy New Year, or Silvester, as they call it.  Wiebe, another elf with a serious attitude problem puts the idea in his head that he should take a little magical revenge on Oskar - why he wouldn't have just
a) set his boss straight about who did the work, or
b) punched Per out for taking credit for his work or
c) taken magical revenge on Per, and not Oskar, I don’t know.

Either way, Ingo is not just your average everyday woodworking elf, he is what they call a Bandiger, a magic tamer, sort of a elf wizard.  He casts a spell on Oskar called Zottig Herz, or Ragged Heart (I’m picking up a little bit of German while reading this series, which is nice.)  The spell is supposed to make a woman irresistible to him, then she will break his heart.  So is it the magic pushing Oskar and Kiana together?  Or is it something else?

Ingo wakes up the next day with a massive hangover and realizes what he’s done.  He immediately starts working on a reversal spell.  On his way to do some research, he and his friends run into Wiebe outside of the theatre.  Wiebe is acting suspiciously, and is dragging his stepdaughter, Gabi, along with him.  The child is obviously upset and frightened, and the friends all agree that Wiebe is up to no good.  They continue on to the Bibliothek Magik to try to undo what Ingo has done.  Back in New York, Oskar has managed to get Kiana to go out with him, and they wind up not just having coffee, but a meal together at a Vietnamese restaurant.  He had tracked her down at a bookstore that she volunteers at, and entranced a whole roomful of kids (Kiana included) at storytime.  It’s obvious how much Kiana loves children, and how good Oskar is with them.  That will come into play later.

Kiana is being very closed mouth about her past, which only makes him more curious.  They have a pretty good date, but while they are getting swept away in a good night kiss Oskar’s phone rings with an emergency.  It kills the mood, and snaps her out of her daze.  On the other end of the phone is one of the elves, Boris, who tells him that there has been an emergency, and he is waiting on the roof with the sleigh to bring him home.  Kiana, curious, follows him up there and winds up stowing away in the trunk of the sleigh.  This is how she ends up in Glasdorf.

Boris tells Oskar that someone has blown up the theatre.  As HR guy, this the elf council is wanting him to head up the investigation to find the arsonist.  Kiana climbs out of the back of the sleigh as soon as she thinks she is alone.  She is standing around wondering if she really is where she thinks she is when she runs across Gabi.  Gabi has run away from her abusive stepfather, and Kiana immediately can see that she’s been neglected.  Once she sees the bruise on Gabi’s face then the deal is sealed - Kiana takes Gabi under her wing, and woe betide anyone trying to harm her.

The story moves quickly from there - I find it hard to believe that Oskar kept Kiana’s presence a secret for as long as he did, but it wasn’t unbelievable.  I’m glad to say that the lightning fast jump into bed problem I noticed in the first book is not evident in this one.  I like a good slow burn, myself, (most of the time) and found it worth the wait.  The rest of the story is engaging and action packed, without losing the “Hallmark movie” cuteness that I so enjoyed in the last book.  This author outdid herself with this one!  She hits on some “real-world” issues in this novel; child abuse and neglect, crime and abuse of power.  All of this was done very well and not cheesily at all.  All in all I was glad to have read this installment of the Klaus brothers, and will continue right on to the next one.