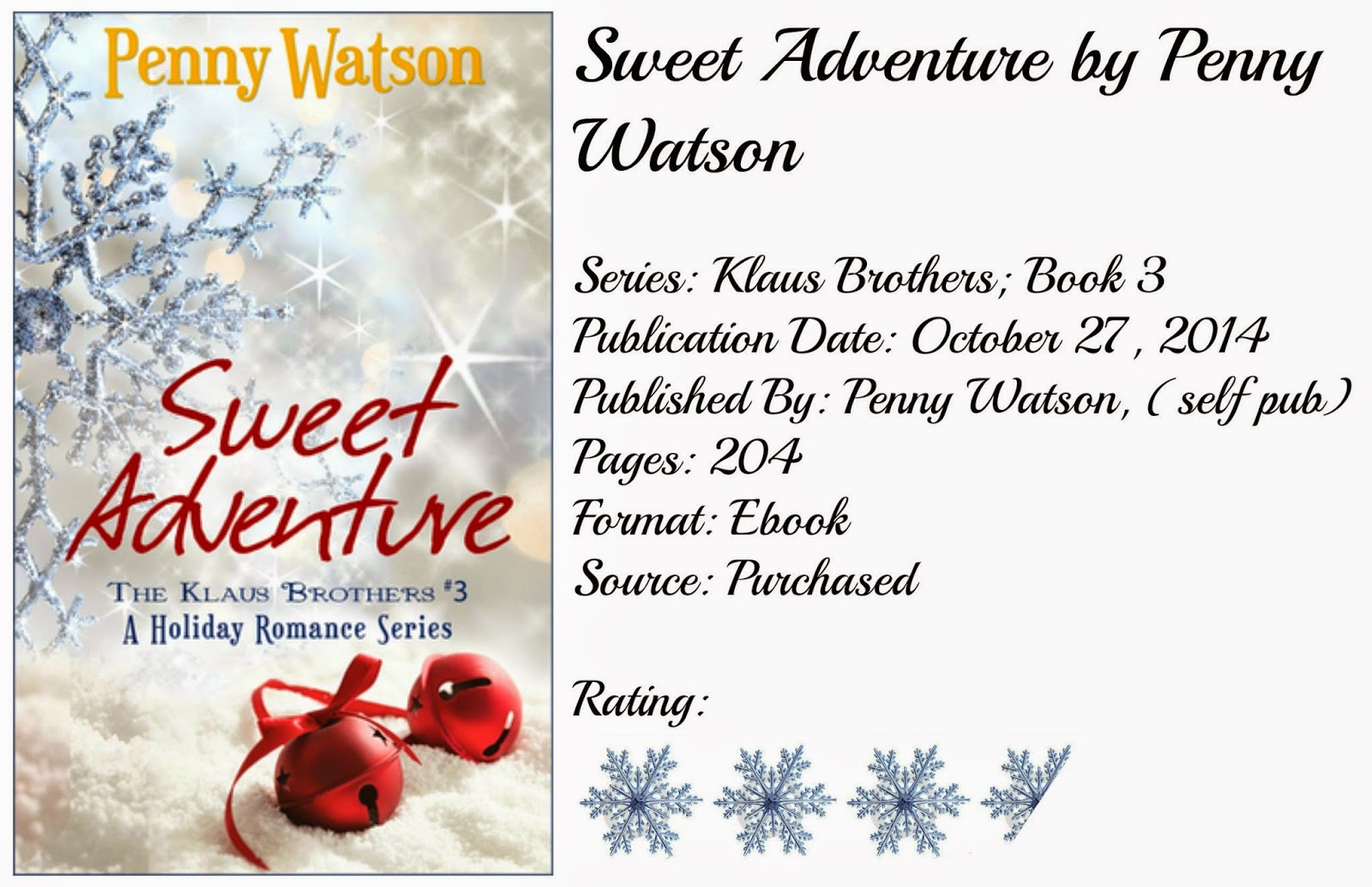 This is the last one I have of this series…..BOOOOO the next one won’t be out until next Christmas!  I may not make it!  Although this story is about a full hundred pages shorter than the previous novel, Sweet Magik, the author keeps you on your toes in this story.  She showcases her talent for action once again, to great effect.  I enjoyed this story.  We don’t really get a dose of the elves this time, we focus almost completely on the couple -  Sven and Andi.  The dynamic between them is most enjoyable, and made for a read that left you wanting more and more.


Unlike the previous two books, which took place one right after the other, it’s obvious that some time has passed since Christmas in this book.  A good bit of time too, as Nicholas and Lucy, the couple from the first book, now have a baby girl, Noelle.


Some people don’t like the email or diary format that some books use these days.  Fortunately I do.   The first chapter of this book is written in dueling emails, and serves to introduce us to the female protagonist/antagonist (however you want to look at it) and reacquaint us with the Klaus that this book focuses on, Sven.  Sven is the head toymaker for the Klaus operation, but he has a guilty secret - he’s really not all that into the toys anymore.  No, his great love is for making highly detailed and beautiful furniture, furniture that is both art and useful.  He has been secretly making plans to open his own studio in New York to showcase and sell his work.  His family has no idea, and keeping it from them is beginning to wear on him.  After all, at the end of the year, Santa is retiring and one of the brothers has to step up to fill the big man’s shoes.  He feels that he would be letting his family down to let them know that he is becoming disenchanted with the one job that he does for them.
Andi - Andrea De Luca - is a tabloid journalist, but that is not the initial reason she gets in contact with Sven and the Klaus family. She purchases one their products for her nephew, and is most pleased with the quality of the toy.  She writes to say thanks - and to ask for an interview.  They put her off, because granting interviews about Santa’s workshop could lead to trouble, ya think?  Being put off does nothing but put her antennae up, and she begins to wonder - just what are they trying to hide?  Andi has secrets of her own to protect, and people who depend on her.  Her parents, her uncle, her recently widowed sister and her two small nephews...Sven isn’t the only one with the weight of responsibility hanging on their shoulders.  She does what she does for one reason, the money. She has completely made up most of her “body of work” which includes her biggest piece, which is, ironically,  about a Yeti.  Her work has changed her from the dreamer and poet that  she used to be into a cynical reporter, suspicious of every motive behind every open hand and bright smile.  The email campaign with Klaus Enterprises turns not necessarily ugly, but very curt, and eventually Sven thinks she has given up.  Oh contraire, she has merely changed tactics, and has managed to score tickets (through her sister Hannah) to a children’s literacy benefit that the entire Klaus family will be attending.


This is where the story really kicks into gear.  Sven notices Andi from across the room, just as his brother Gregor (the financier of the family) is drawn to Hannah.  Like magnets, those two are.  I’m dying for the next book because I know it will be about them.  Andi is attracted to Sven, he’s not quite the the laid back hippie she was expecting.  No, she compares him more to a lion, blond and bearded, with intense eyes and broad shoulders.  (All of these guys are described looking like the Brawny man!)


Despite her intense interest in him she manages to keep her mind on her task and slip a tracker into his pocket.  She is determined to find the Klaus toy factory, and expose all of the dirty secrets that she’s sure are hidden there.  She slips out of the benefit, leaving her sister a text that she wasn’t feeling well.  Sven gets an urgent call that he needs to get back to the shop asap.  Also his sleigh is busted and he will have to take another route, by plane, but he needs to hurry because there is a huge storm on the way.


Sven isn’t happy about it, but he takes off for the airport, unaware that Andi is on his heels.  She cashes in a favor from a source to get into the cargo hold of the plane.  Once they are in the air she is captured by the crew and brought up to the cabin.  Sven is furious to find out that the pretty girl that he spent the night dancing with and wishing he could spend more time with is really the annoying reporter he thought he had managed to shake off the scent of his family.  He cannot deny his attraction to her though, and is not nearly as cold to her as he could have been.  They land in Alaska where they are told that the airport is in the process of shutting down for the storm.  They won’t be getting out of there anytime soon.  Sven has to make a hard decision - does he take her with him to Glasdorf the back way, through a tunnel, or leave her there in the airport.  There are no hotels anywhere, and no flights to take her back to New York.  He sends a text to the elves to turn off  the defenses in the tunnel, and hopes that it gets through.  Andi is understandably freaked out when she realizes that they are driving out into a Category 5 blizzard, but her confusion is only beginning.  The back route to Glasdorf is through a rail system set into a tunnel that runs all the way to the Arctic Circle.  On the way to Glasdorf they get to know each other better, and he is on the very edge of telling her the truth when they are attacked.  The text obviously didn’t go through and there is no way to explain the frost flowers attacking them without explaining it all.  Yes, I said frost flowers, flowers made of ice, that will burn you and cut you, and are looking very hard to kill you.  Sven himself is haunted by an earlier encounter with them, and Andi is likely to have some repercussions as well.  These things are pretty ruthless.  Finally they fight the worst of them off and continue on their way, bleeding and soaked and (in Andi’s case) completely terrified.  She’s hypothermic, so Sven uses the best method to warm her up - body heat.  Sparks fly, and they have no problem heating each other up **snicker** all the rest of the way to Glasdorf.


They reach the end of the tunnel only to find that it has collapses under the weight of the snow above.  They have to climb up and out in a total white out to the gates.  They make it up out of the tunnel only to face the last defense - yep, you guessed it, Yetis.  This isn’t Bumble from Rudolph the Red Nosed Reindeer folks, these things are vicious and both of them are injured before reaching safety.  They make it inside the city and to safety, but that only opens up another can of worms.  The council and Sven’s dad are all furious that he would bring a tabloid reporter to Glasdorf.  They feel that there is no way she can be trusted.  The Council calls a Tag der Rache (Day of Reckoning, they did this in the first book also) to judge Sven’s actions and determine whether Andi can be trusted.  Sven is already in love with Andi (and she with him) and objects to anyone questioning her word.  The elves have a method of wiping Suddie’s memories, but that would erase everything, including her memories of Sven.  Will Sven be exiled to the Sudenweld?


Yep, I’m stopping there.  As I mentioned before, this book is action packed.  Where I stopped is only about halfway through the book, so be assured there is plenty more story to discover for yourself.


I didn’t expect to enjoy this series half as much as I did, but I sure am glad that Barb and I picked it up for Christmas reading.  The author has grown throughout the series and you can tell a marked difference between the first installment of the series and this one.  She has other books as well, this is not her only work.  The language in the first one occasionally comes off as cheesy, which is a common downfall of romance novels.  There is none of this in this novel.  It comes off as smartly written and although the material is admittedly fantastical, it’s written believably.  This whole series has been a fun read for me, and I will be waiting (IMPATIENTLY) for the next chapters in this series’ story.

Till next time, keep it between the pages.