Summary
Nia Martins believes a fresh start will help her leave her traumatic past behind. Moving to a different country, she seeks to shake off her demons by doing the one thing that sets her free from her destructive thoughts – teaching dance. But change doesn't come easy, and all Nia really wants is to take the next breath without the perpetual suffocation that follows.

Reeves Mitchell has looked death in the eyes so many times it’s become habitual. That is, until his best friend's life was on the line. When the one thing he feared the most turns into reality, all he can do is pick up the pieces of his loss. As Reeves tries to live with the constant thought of “what if” gnawing at the back of his mind, he persistently and steadily builds a thick wall around himself.

Their solitary lives are all they have—until fate brings them together. Nia and Reeves’ new friendship helps make life, shadowed by the ghosts of their past, more bearable. But as their relationship deepens and new, suppressed feelings emerge between them, are they willing to retrace their steps back to where wounded hearts can be broken once more?

*THIS IS A STAND-ALONE NOVEL*
New Adult Contemporary Romance: Due to strong language and sexual content, this book is not intended for readers under the age of 18. 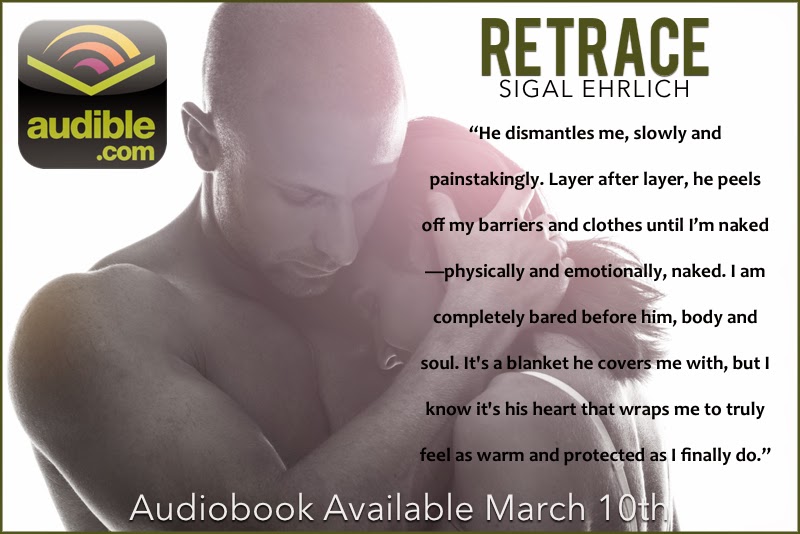 Listen to a sample of Retrace!
https://tantor.com/retrace-sigal-ehrlich.html


Guest Post
‘My inspiration for Retrace’
"I can’t put my finger on anything specific that inspired me to write RETRACE. It was more a blend of many things that eventually grew into a story about letting go and learning to love and accept. Some of the key elements that did inspire me though, were a few crazy, vivid dreams that eventually turned into scenes, music, a lot of music, and mainly the characters themselves. Reeves and Nia practically seized my mind to the point I couldn't concentrate on anything else and just had to pour their story out of me. The book traces their hesitant journey into deep friendship that helps them cope with traumatic pasts, and gradually leads them to discover the path to heal and accept. As Nia and Reeves’ characters developed into people I believed my readers would feel strongly about, and connect with, in tandem the story took shape into an emotional ride with touches of angst, humor, suspense and a whole lot of steam…"

By teen age, Sigal already lived in three different continents where she was lucky enough to experience and visit varied places, meet unique people, which only helped fuel her overly developed imagination. Currently, Sigal calls Estonia home where she lives with her husband and three kids. Not exactly sure where they will end up next…

Giveaway!
Enter to win one of TWO Audiobooks of RETRACE
a Rafflecopter giveaway